Hazrat Molana Syed Badar Alam Merthi Sum-al-madni came to Bahawalnagar after serving for 6 years in Dar-ul-Uloom Deoband and 17 years in Jamia Islamia Dabhel (India) in the field of “Ilm-e-Hadith”. When he came to Bahawalnagar, he felt that a strong institution is really needed for the educational advancement of the people of locality. So, Molana Syed Badar Alam Merthi R.A alongwith Hazrat Molana Niaz Muhammad Khutni (R.A), & Molana Aman Ullah Khan Khakwani, Hazrat Molana Abdul Shakoor Khakwani, Saif Ullah Khan and other associates set the foundation stone of the Jamia-ul-Uloom Eidgah, Bahawalnagar with his own hands on 16th Zilhaj 1364, (1944) in the heart of the city.

In the beginning this institute consisted of only two rooms, which now has turned into a huge building. As per saying of Hazrat Allama Yousaf Banori (R.A),”after Dabhel, Bahawalnar became the center of his kind blessings and hundreds of people were benefited.”
Under the supervision of Hazrat Molana Syed Badar Alam Merthi Sum-al-madni (R.A) Quran and Hadith classes were started beneath the shadow of trees. Administrative matters were assigned to Hazrart Molana Niaz Muhammad Khutni (R.A) . One of the initial two rooms was used for his residence and other became the classroom where Hazrat Molana Syed Badar Alam Merthi (R.A) used to deliver the lectures on Hadith. Along with him Molana Abdul Hannan Kamelpuri (R.A) & Abdul Aziz Kamelpuri (R.A) also served the teaching purpose. Knowledge seekers started to gather there not only from different parts of Pakistan.

Administration of the institute

That the institute was started on the basis of pure faith in God, physical means and financial resources were neither available nor considered. It was a hard time even in the beginning and after wards the circumstances forced them to starvation and to meet the both ends they had to catch fishes from the canal and boil ordinary tree leaves to make tea, but Hazrat Molana Mufti Niaz Muhammad Khutni (R.A) never gave up as per will of Hazrat Syed Badar Alam Merthi (R.A) . Although he had moved to Madina apart from the institute but he never deprived off the institute from his kind attention and prayers till his last breath. After his death, his son Syed Aftab Alam Madni (R.A) supervised the institute. After the death of Hazrat Khutni in (R.A) January 1992 his son learned Islamia Banori Town Karachi and M.A Islamiyat Islamia University Bahawalpur. Molana Jalil Ahmad Akhon Sahib D.B.A was appointed as Administrator and the responsibilities of supervision were assigned to Molana Syed Aftab Alam Madni (R.A) along with Shaheed-e-Islam Hazrat Molana Muhammad Yousaf Ludhyanvi Shaheed (R.A). The institute enjoyed their precious directions and guidance till their last breath.After them the institute was governed by Molana Hakeem Muhammad Akhtar Sahib (D.B.A). Dedication of all of them has turned that institute of two rooms into a huge building and structure and it has also become one of the leading institutes of the countries

PROCEDURAL CODE OF THE INSTITUTE:

Administration of the institute is governed by administrator, superintendent and accountant, computers are also easing out the administration. Accounts ledgers are properly maintained in written form. Income and expenditure is directly linked with the banks. Bills are passed by the Administrator and member of the committee deputed for this purpose and cheques are cashed with their joint signatures. Separate ledger is maintained for each category. Annual audit is also conducted regularly.

There is a proper board of directors and meetings of the same are held regularly. First Chief Executive of the board was Molana Badar Alam Merthi, Sum-ul-Madni R.A, after him the responsibilities were taken over by his son Syed Aftab Alam Madni and Shaheed-e-Millat Hazrat Molana Muhammad Yousaf Ludhanvi Shaheed R.A. Now Arifbillah Hazrat Molana Hakeem Muhammad Akhtar Sahib DamatBarkathum is presiding the board. First president of the board was Molana Khan Abdul Shakoor Khan Khakwani R.A after him Molana Khan Muhammad Khan Khakwani became president and now this responsibility is satisfied by Khan Muhammad Khan.

For admission at any level, a candidate has to submit his application to the Administrator and then from the office Admission form is issued, at the back of the form all rules and regulations are printed necessary to be obeyed by the student. Student has to submit this form after its due completion to the Director Education. After its scrutiny and approval, same is sent to Administrator who order for admission of the student as per his financial conditions in suitable package. There is no admission fee same procedure is adopted for girls but conducted by female staff.

Three examination are held in a year for both Dars-e-Nizami and Hifz & Qira levels. Quarterly, half yearly and annual, quarterly and half yearly exams are held by the institute itself, and for the annual exams examiners from other renowned institutions are invited who conduct the oral and written annual examinations. Such exams in which the certificate or degree is issued by the Wifaq, those are held and conducted by the wifaq.

This institute has been affiliated with “Wifaq-ul-Madaris Al-Arabia, Pakistan” in 1985 (1406 Hijri) and has been selected as Examination Center for the whole district.By the grace of God, this institute is progressing with zeal and zest. It is requested to all the Muslims to pray for the progress and growth of this institute, and it is prayed to God that he may bless all those who struggle for this institute and may succeed them in this word and thereafter.

This department consist of 7 classes being administered by 9 very talented and hardworking teachers. Quran-e-Kareem is taught in this department. By the grace of God, every year nearly 200 students achieve the honour of Hifz-e-Quran. Examination of the students who complete the Hifz-e-Quran, is held by Wifaq, and a certificate of “Tehfeez-ul-Quran-e-Kareem” is conferred upon. It is pertinent to mention here that in this department along with Hifz-e-Quran, classes for method of Namaz, Prayers of the holy prophet (PBUH), and Sunnah are also conducted. Usually a student became a Hafiz in three years. For Girls two classes of Hifz are conducted.
Department of Tajveed-ul-Quran
This department has been specially emphasized to correct the pronunciation and accent of the students for reciting Quran. For this purpose Quran is taught with traditional rules and regulations and recitation is exercised. By the grace of God, students of this department have shown distinctions in different competitions from lower to highest levels. It is a three years course and services of expert Qura’s have been arranged. At the completion of this course a certificate of “Tajveed-ul-Qura-ala-Rivaya” is granted by Jamia. 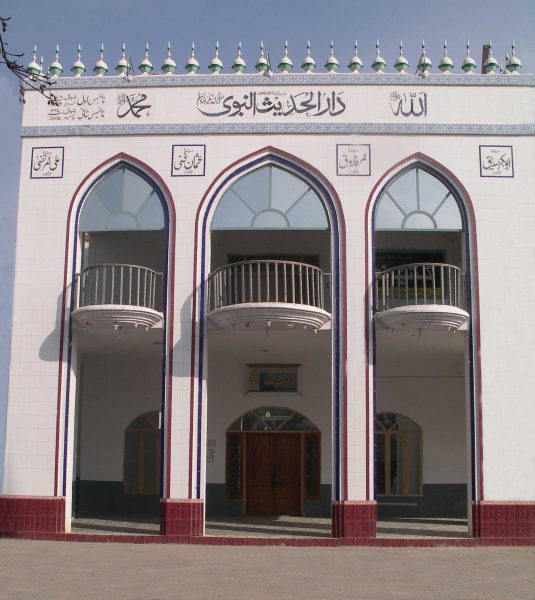 It is equal to M.A. Arabic and Islamiat. This level is also called the Hadith Level. Any institute is know by its Hadith Level. This level has been included in this institute since beginning. Examination is held by the Wifaq and at the completion of this year “Dastar-e-Fazelat” is conferred upon. Books are as under “Sahah-e-Sita” Bukhari Sharif complete, Tirmezi Sharif Complete, Abu-Dawooed Sharif complete, Muslim Sharif complete, including Tahavi, Mota Imam Malik, Mota Imam Muhammad, Sunan-e-Nisai, Sunan-e-Ibn-e-Maja. Succeeding candidates obtain a degree of “Al-Almia fel-Uloom Al- Arabia” from the Wifaq and the institutes also issues its own certificate.

This esteemed department is serving the people since long, and thousands of “Fatawas” have been issued in different problems. Personals of very high intellect and having great knowledge & wisdom are serving in this department. And a “Fatwa” issued by this department is highly ranked in Govt. offices, Courts and in Punchiats. Problems are referred to this department not only from Pakistan but also from abroad. Currently the head of this department is Molana Mufti Khaleeq Ahmad Akhon D.B.A who is younger son in law of Hazarad Ludhyanvi Shaheed who was the younger son of  Hazrat Khutni R.A.

500 Students have completed this level uptill now who have been issued the Degrees of “Takhsus Fil Fiqah Islami”. All those Learned Mufti’s are now serving in different parts of the country as well as in the world. 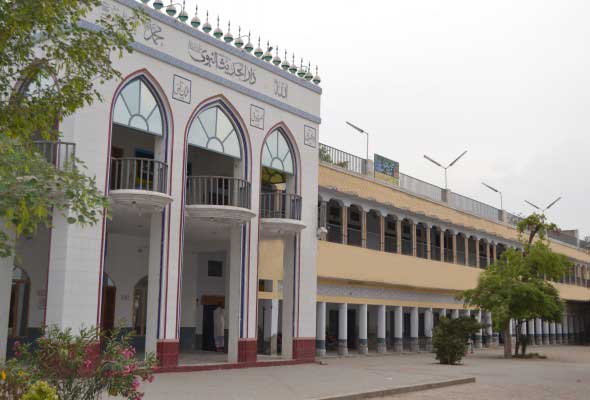 This department is considered as a back bone of any institute. There are nine levels in it, and very intellectuals and scholars do serve the same. Each level is completed in one year. The syllabus approved by Wifaq-ul-Madaris Al-Arabia Pakistan, is administered in these levels, detail of these levels is provided hereunder;

This is the first step of Alim course. In this level along with the Practice of Quran (tilawa) initial English, Maths, Farsi, and Urdu books are taught, writing practice is also a part of this level. Internal examination of the institute is held for this level.

This level is equal to middle of common education, and common middle syllabus is taught. Examination is held by the Wifaq and Certificate of “Al-Mutwasita” is issued by the examining body. Gulistan, Bostan, Khulsa Al-Tajweed, English, Bahisti Gohar, Serat-e- Rasool (PBUH) Maths, Urdu and Social Studies are taugh

It is parallel to Metric and the examination of the same is held by the Wifaq. Certificate of “Al-Sanvia Aama” is issued. Translation of last Chapter of Quran along with Complete Qadrvi, Fawaid-e-Makia, Zad-Al-Talbin, Logic, Ilm-us-Segha, Qarat-ur-Rashida, Mualim-ul-Insha and Hidaya Al-Nahev are taught in this level.

It is parallel to F.A. and the examination of the same is held by the Wifaq and certificate of “Al-Sanvia Khasa” is issued. In this year, translation of ten chapters of Quran from the middle along with Shara Daqaya, Qutbi, Shara Jami, Muqamat-e-Hareri, Daroos-al-Balagha, Noor-ul-Anwar, are taught.
Level Khamsa
In this Level first ten chapters of Quran are taught with translation along with Saba-al-Muaalaqat, Mukhtarat Al-Adab, Hassami, Hadaya Volume One, Diwan Mutni
Level Aalia
It is equal to B.A. Examination is held by Wifaq and Degree of Al-Aalia is issued. Detail of books of this level is as under; Jalalen Sharif, Hidaya Volume two, Aqida Tahavia, Sharah Aqaid, Fehem Al-Falqiyat, Al-Tozeh-al-Talveh,Siraji, Masnad Imam-e-Azam, Diwan Al-Khamisa.

It is equal to M.A. Arabic and Islamiat. This level is also called the Hadith Level. Any institute is know by its Hadith Level. This level has been included in this institute since beginning. Examination is held by the Wifaq and at the completion of this year “Dastar-e-Fazelat” is conferred upon. Books are as under “Sahah-e-Sita” Bukhari Sharif complete, Tirmezi Sharif Complete, Abu-Dawooed Sharif complete, Muslim Sharif complete, including Tahavi, Mota Imam Malik, Mota Imam Muhammad, Sunan-e-Nisai, Sunan-e-Ibn-e-Maja. Succeeding candidates obtain a degree of “Al-Almia fel-Uloom Al-Arabia” from the Wifaq and the institutes also issues its own certificate.

This department administer five levels. A girl is admitted at least after completing her Matriculation.

This is the first step for Alima Course. Examination is held by the institute itself. In this level following books are taught Lisan-ul-Quran, Ilm-us-Sarf-al-Awaleen, Ilm-al-Nahev, Mashq-al-Quran, Al-Tareeqa-Al-Jadeedia, Islamic Education.

This level is equal to Matric, Examination is held by the Wifaq, and the certificate of “Sanvia Aama” is issued. Book taught in this level are as under; Khulasa-al-Tajveed, History of Islam, Ilm-al-Sarf-o-Aakhreen, Awamil-al-Nahev, tareeqa Al-Asria, Zad-al-Talbin, Bahisti Zever, Quran Majeed and the translation of last chapter of Quran.

This level is equal to F.A. and the examination of the same is held by the Wifaq and the certificate of “Sanvia Khasa” is issued. Detail of books taught in this year is as under; Asool Alshahi, Tasheel Al-Zaroori, Riaz-al-Saliheen, Qasas-al-Nabeen, Seerat Sahabiat, Hidaya Al-Nahev, Tajveed, Translation of ten chapters of Quran.

This level is equal to B.A., and its examination is held by the Wifaq-ul-Madaris, and those who succeed are granted with the Certificate of “Al-Alia”. Following books constitute the syllabus of this level. Mishkat Sharif, Asool-e-Hadith, Droos-ul-Balagha, Siraji, Muqamat-e-Hariri and Translation of the last ten chapters of Quran.

Another departement in Jamia is Blood Bank.this blood bank providing blood facility to all citizens of bahawalnagar. Disease test lab facility is also working in this blood bank.The blood bank is responsible for: 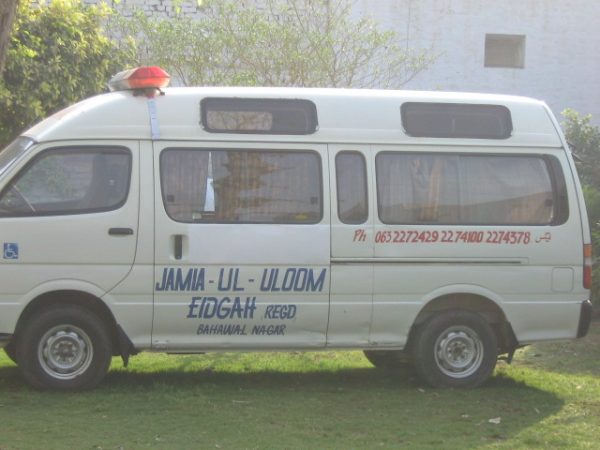 Mufti Niaz walfare Trust is providing free medical Treatment  for institute Students and out side people. 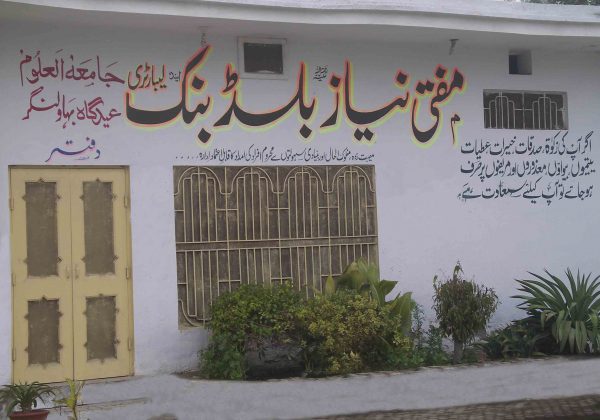 Dedicated services of competent doctors is very much a specialty of this dispensary and specialist of pain, eyes,chest,heart and gynecologist ,visits dispensary everymonth and distribute free medicine to needy people of bahawalnagar.